1 Chronicles 15:13 It was because you, the Levites, did not bring it up the first time that the Lord our God broke out in anger against us. We did not inquire of him about how to do it in the prescribed way.

What was the difference between David’s first failed attempt to bring the ark to Jerusalem and the second successful attempt?

The first time, he put the ark on a new cart drawn by oxen.  When the oxen stumbled and the cart tipped, Uzza (one of the drivers) put out his hand to steady the ark, and the Lord struck him dead for touching it.  It was an “outburst” by the Lord, and it made David angry and afraid and unwilling to risk bringing the ark to Jerusalem.

The second time, David carefully followed the instructions in God’s law for transporting the ark.  It was not to be on a cart, but carried on the shoulders of the Levites using poles that went through rings on the sides of the ark.  (See illustration below.)

The first time, David was angry at the Lord’s outburst.  It seemed capricious.  But then he realized that they had done it incorrectly, not following God’s instructions, and this led to Uzza doing something forbidden: touching the ark.  It was a double disobedience: David’s and Uzza’s.  God wasn’t being arbitrary or capricious.  His anger is His just response to evil—in this case, the evil of ignoring His instructions, of taking Him lightly, of thinking He needs our help and we know better, and of failing to understand His holiness.

Someone asked me Saturday after the service if this story of God’s outburst against Uzza disproves my statement that “God’s anger is never arbitrary, capricious or selfish. God’s anger is His just, reasoned and righteous response to evil.”  It certainly looks like it on the surface.  David thought it seemed capricious at first.  But when he learned what God said, he saw it differently.

The people of Beth Shemesh—Jewish people who knew the law—opened the ark to look inside, and 70 of them died (1 Samuel 6).  They knew, they disobeyed, they died.  The wages of sin is death.

The Gentile people of Philistia put the ark on a new cart to return it to Israel.  They didn’t know, they disobeyed, nothing happened.

God’s anger is not capricious.  It is directed at evil—in this case, disobedience to known commands.  What makes it hard for us is that David was trying to do the right thing, and most likely so was Uzza—he was trying to protect the ark.  But the whole thing was botched from the start because David didn’t start with what God wanted.

“What do you want me to do?  What do you have say about this?”  Start there.

God wants and deserves to be taken seriously.  When we don’t, He is angry—and that is righteous anger, not capricious anger.

Prayer: Lord, thank you that you are slow to anger, and your anger is never capricious, arbitrary or selfish.  I never want to anger you!  But when I do, I want to learn from it, and know that I’ll receive your grace and forgiveness.  Help me to always take you seriously, and seek your will in all things. 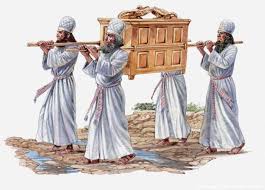