The scandal of the cross

The scandal of the cross

Most of us are so familiar with the story of Jesus’ crucifixion that we are somewhat numb to the horror of it.

I’m reading The Crucifixion, by Fleming Rutledge.  She emphasizes that crucifixion was the Roman mode of death for criminals, rebels and slaves.  Roman citizens were not crucified.  It was reserved for the dregs of humanity.  To die by crucifixion was shameful and scandalous.

This is what Paul referred to in Galatians 5:11. “Brothers and sisters, if I am still preaching circumcision, why am I still being persecuted? In that case the offense of the cross has been abolished.”  The word “offense” translates the Greek word skandalon; we get the word “scandal” from it.  The crucifixion was a scandal, an offense, a stumbling block for people.  How can you worship a crucified God?

1 Corinthians 1:22–24 “Jews demand signs and Greeks look for wisdom, 23 but we preach Christ crucified: a stumbling block to Jews and foolishness to Gentiles, 24 but to those whom God has called, both Jews and Greeks, Christ the power of God and the wisdom of God.”

Christ crucified is a stumbling block (skandalon) and foolishness.  No one could have dreamed up a story about God saving the world by coming to earth and being crucified.  Scandalous!  Offensive!  Ridiculous!

In the late second century, someone scratched some graffiti on a plaster wall in Rome.  It pictures Jesus on the cross with a donkey’s head, and a man with a hand raised in worship.  The inscription in Latin reads, “Alexamenos worships his god.”  (See image below). It is meant to mock Alexamenos and Christians in general for worshipping a crucified God.  Only criminals and lowlife were crucified.  A crucified God—unthinkable.  Scandalous!

Philippians 2:8 “And being found in appearance as a man, he humbled himself by becoming obedient to death—even death on a cross!”

Jesus didn’t just die; He was crucified.  He didn’t just experience death for us; He experienced the most shameful death imaginable.  The scandal of the cross.

So the cross—once the hated emblem of Roman torture, death and shame—has become the emblem of God’s love and grace.

What does this mean to us?  Jesus’ crucifixion means that God went to the lowest, most desolate, most despised depths to reach us.  No one—no criminal, no rebel, no low-life is beyond the reach of His redemptive love.

Don’t take this for granted!  I hope you’ll spend some time thinking about the scandal of the cross, and what Jesus’ crucifixion means for you… and the world you inhabit.

Prayer: Lord, words can’t begin to express our debt of gratitude, or the depth of our wonder that You would do this for us! 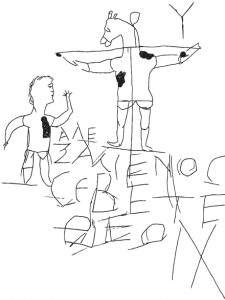