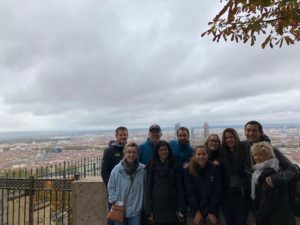 We started the day at 8:00am with croissants and tea with our hosts. (To be technical, I started the day at more like 4:00am—darn jet lag.) Rachel and I are staying with a trio of 20-somethings who have welcomed us into their flat as roommates 4 and 5. Our conversations over shared meals have been a highlight of the trip so far.
After “morning meds” (meditations) with Jenn, we went on a walking tour of the city to learn more about the ancient history of Lyon. We saw ruins of a coliseum and Fourvière. Breathtaking. We prayed for the city after learning of its early Christian roots.
In the afternoon, Jenn arranged a discussion group between us Americans and a group of French church members, and invited us to explore and share about topics of faith and culture. It was an awesome time of learning and laughter as we sheepishly admitted to some of their stereotypes of us, and they to ours. But we discovered more that connects us than separates us. Thanks, Jesus! 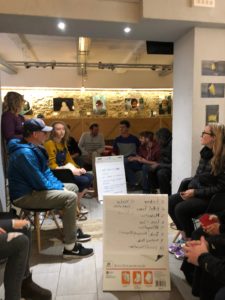 Free time followed. A group of us returned to the cathedral so we could tour the inside. It was amaaaazing. (We get teased for our American enthusiasm, and overuse of that word in particular, but in this case it is highly apropos. Amazing doesn’t even cut it, in fact.) Jaz and I broke off from the group to find some street art we’d heard about. And here’s where our day took a turn for the, um, adventurous…. 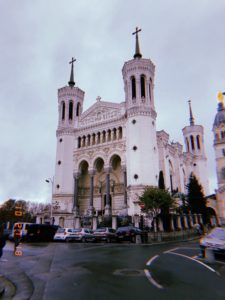 First of all, neither of us have a sense of direction. And neither of us had a phone. Oh, and neither of us speak French. You see where this is going don’t you? We got lost. And even though we had a map, we hadn’t marked a very important detail on it—the Williamsons’ church, where we were supposed to meet at 6:30pm. Needless to say, we didn’t make it to the rendezvous.
God used it anyway. Did you know he can use the lost?
We began by asking a storekeeper, in French, if she spoke English. No dice. We asked a couple gentleman next, and they did— but they didn’t recognize the name of our destination: Polygones. We asked a waitress who works by Dave and Jenn’s place if we could use her phone. She ushered us inside the restaurant, told us to get warm (by now it was 7:00pm, dark, and drizzly), and handed us her phone with instructions to make as many calls as needed. But we only got Jenn’s voicemail. So we stopped another couple, and found the gentleman could speak Spanish as well as I can (mediocre at best). He gave us directions to the metro (en espanol)—a landmark we knew and could find Polygones from. On our way, Dave ran into us and walked us the rest of the way. The team had been praying for our safe return.
Dave and Jenn said they knew the waitress who’d helped us, and our misadventure gave them a reason to talk with her in the future and thank her. Their whole mission here is to invest in their neighborhood. We unwittingly aided that effort. Our French hosts commented on the fact that our not having a phone led us to interact with strangers we would have otherwise ignored had we the ability to text our friends. And, all the while, (other than being afraid that we were worrying and inconveniencing our group) Jaz and I had a grand time being lost in a foreign country with few resources to assist us.
After that (yes, there’s more), Rachel and I returned to our hosts’ flat for dinner. But we entered the wrong building (in our defense, they looked exactly the same) and managed to lock ourselves in. Through sheer luck (pushing buttons) the door swung open to free us. We weren’t even late to dinner! (Which were homemade crepes, by the way.) Three of our hosts’ friends joined us, and we ate, chatted and laughed for hours. Two of them ended up staying overnight. It’s cozy in here!
Ready for tomorrow! (Hopefully it’s a smidge less eventful—haha.) 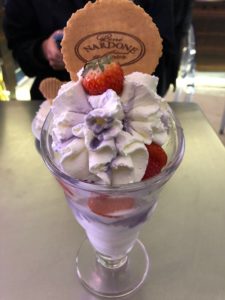