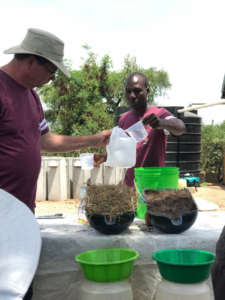 Stephen updates us on “Farming God’s Way” technique and “I was Thirsty Campaign” kickoff:

This morning and early afternoon were spent at the SOHI land in Adiedo meeting with the Regional Economic Development Committee, Regional Education Committee, and several other community leaders.  The topic was the introduction of a low/zero tillage farming technique called Farming God’s Way (FGW).  This technique is rapidly growing in its application across Africa as it is highly appropriate and effective for people living in poverty who do not have the resources to effectively apply first-world techniques.  Traditional farming approaches we propose replacing involve tilling the soil thereby destroying the beneficial living organisms and releasing moisture and nutrients to the air causing crops yields to be low and/or plants to wilt and die in the chronic droughts. It is particularly exciting because, when applied properly, history has shown that FGW can result in crop yields 10 to 20 times higher than farmers are currently getting!

David and Stephen attended training in Indiana on the FGW technique in August 2018.  At the meeting today, we presented and demonstrated the benefits of FGW.  Then, provided hands-on training by planting a demonstration garden with attendees (including the SOHI team).  Community attendees appeared to be skeptical at first, but quickly became very excited about the potential results of implementing FGW.  We encouraged them to try FGW on a small portion of their land to see for themselves. They were also charged with spreading the word throughout the community and recruiting up to 500 farmers that we hope to train extensively at the end of January, 2019.

Yesterday (Thursday) at the end of the Leadership seminar, we hosted an event announcing the “I Was Thirsty” campaign that SOHI is kicking off.  This event was attended by all of the seminar participants, area chiefs and their assistants, the Deputy Regional Commissioner, the Ministry of Health, and Ministry of Education.

The campaign will address serious, chronic health problems present in the community’s 41 public schools by providing sufficient clean water sources and storage, latrines, and sanitation & health training.  A recent assessment showed that 93% of schools do not have sufficient access to clean water, 98% do not have adequate latrines (outhouses), and 88% do not provide any form of sanitation and health training to students. Approximately 15,000 students will be benefited during the first year that upgrades are implemented; the 20+ year design life of the upgrades will result in improved health for hundreds of thousands of students.  The response of the community was heartfelt appreciation to God (and SOHI) and commitment to care for and maintain the systems diligently.

To date, SOHI has raised funds to upgrade approximately 24 of the schools; funds are still being sought from generous donors for the remaining schools. 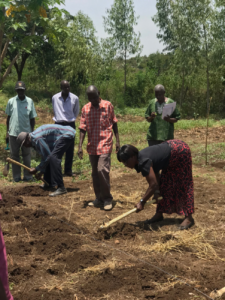