There are three parts to today’s blog as the group was split to accomplish different tasks:

Well, Kyha, Michael, Elijah,Haylee, Elvira and I were chosen to go to the prison. We had breakfast around 6:30 am. After breakfast we loaded up in the van and went to 2fish, (which is a local outreach center) and we prepared sandwiches for the prisoners. We had a great time conversing with the staff of 2fish. Then we went arrived at the prison.

Coming into the prison we could only have our ID’s and bibles with us. A man with an assault rifle let us into the prison, and gave us all stamps. He said if we didn’t have stamps then we couldn’t get out. However, the prison staff was very nice! Afterwards, we entered the small church located in the prison courtyard. There were around 30-40 inmates that attended the service. We began worship, and even though we couldn’t understand what they were saying, we could tell that these men were singing with their heart. So much so that it brought some of our group to tears.

After worship, I delivered a short message on hope, and Gods love. The message was centered around Paul, before and after his conversion. The inmates seemed to enjoy the message which was good. Then Antonio, (The actual Pastor of the church) shared a message on purpose! It was really good, he spoke passionately, and the inmates loved it. We then had a worship service, and Conrad prayed over the inmates and called them forward saying, “If you believe God has a purpose on your life, come to the front of the room and thesepastors will pray for you.” We listened to another worship song, and then everyone from our crew prayed over the men who had come forward.

In Mexico, before being sentenced for a crime you are sent to “Jail”, which is a holding place in which they provide you with no food, no water, etc. for up to 72 hours before they move you to prison. Kaylee, Ryan, Taylor, & Corey were blessed with the opportunity to bring the gentlemen held there the good news and some good sandwiches. They each got to tell some testimonies and get to know some of the guys who were being held there. It was an amazing opportunity to witness God move in people’s lives even in the darkest moments.

Today after we got ready and had breakfast and while the first group was at the prison, the rest of us loaded up in the bus and headed to the church where we began preparing for the Collide Conference. Halfway through getting everything ready we had fish tacos for lunch at the church and then got right back to it. We rewired the stage, setup the auditorium, the band learned some songs, and also set up the workshop rooms. Then we rushed back to the mission center (the place were we stay) and hustled to get ready to preach. Once back at the church at 5:55 we huddled into a big circle and prayed for the conference and at 6 we welcomed everyone in and the party began! Everything went fantastic, from the worship to the message to the workshops it was a big success to kick off the conference! Afterward we piled into the bus again and headed south for some dinner, and boy was it good! 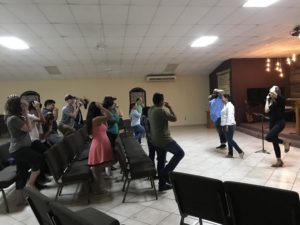 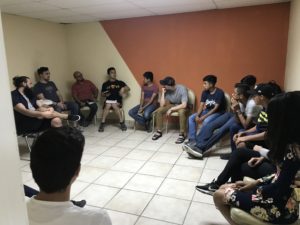